Dr. Om Parkash was born on the 22nd of July 1928 at Dulmial in Jehlam District now in Pakistan. The idea of becoming an eye surgeon was conceived by inspiration from Dr. Tulsi Dass, maternal uncle. He did his graduation and post graduation from Glancy Medical College, Amritsar in 1950 and 1957 respectively.

He joined the Department of Ophthalmology, Medical College Amritsar and worked in various capacities till he was shifted to Medical College Rohtak, where he was head of the department. In those days of 1968 when the Govt. job was considered a highly coveted and securing job, he resigned against all oppositions from all quarters and set up his private practice in Amritsar.

Eighteen papers on Eye Diseases published in Indian and Foreign Journals. Highlight of original work was “New Technique of wound closer cataract Surgery”. Now this technique is adopted by reputed Eye Surgeons the world over. 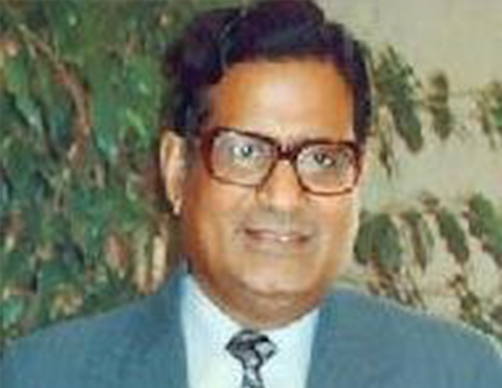 In the memory of the son of his friend Dr. B.R Nayyar, a mobile Unit of Rajan Memorial eye institute jalandar was set up, which conducted more than 300 Free Eye Camps in Punjab, Haryana and J&K States. This service is still being continued in his fond memory in both Rural and Urban Areas.

By virtue of both quality and quantity of work done by this 150 bedded hospital. The Medical Counsil of India gave recognition for 4-houseman ship in a year. This was the sole eye institute in state of Punjab, which was given recognition by the National academy of Medical Sciences, New Delhi for post-graduate degree in Ophthalmology.

A teacher to core of heart, as he was, the inclination to teaching was further catered to by his joining as visiting professor of Ophthalmology, Christian Medical College Ludhiana for one day in a week.

He was snatched away, when the best was yet to be at the age of 57Yrs on Dec 21st, 1985. He leaves behind his wife Ambica and two sons Rohit and Arun.

Dr. Om Parkash changed with time and started using Operating Microscope and he used to say to the beginners “If you want to eat, eat under the microscope” using operating Microscope, according to him was mandatory.

He was fully adept in the finer aspects of indirect Ophthalmoscope and Retinal treatments. He started doing Xenon Arc Photocoagulation as earlier as First Half of 70’s. One of the First to be fully adept in Vitreo Retinal Surgeries, he performed more than 1000 Retinal surgeries.

He started corneal grafting in 1972-73. He did a little less than 1000 corneal Graftings. Radial Kerototomy using Sapphire Blades was his latest Passion. Starting it after his return from USA in 1984, he performed around 340RKs in 1984-85.

He was very quick in Sac surgery. In Srinagar camp on the day for Extra Ocular Surgeries amongst other things he did around 16DCRs. He did not spare vertical Muscle Surgeries. He performed Orbitotomies around 25 in number.

Blaskovics Procedure was his procedure of choice in his more than 1000 cases.

THE ONLY THING, WHICH HE LACKED, WAS THAT HE DID NOT PROJECT HIMSELF. HE WAS A SILENT WORKER WHO BELIEVED IN HIS WORK DOING THE TALKING.

WHAT IS LEFT BEHIND IS NOT THE MONUMENTAL SATYAM NETRALAYA BUT THE LEGACY OF GOODWILL IN INDIA.

Well trained courteous staff. God gifted doctor Khanna who excels in establishing a bond with the patient; has all the good qualities topped by being a very good human being. May this hospital reach greater heights!

After golden temple, Border, Third busy thing to see the discipline of your hospital.

The appreciation for this organization cannot be expressed in words. I always felt that they believe in service and not profit. Its appear as the almighty has a hand over them. Their services way of talking, treatment, administration, co-ordination, public dealing, comfort/ attitude is out of the world and exemplary. May God bless each & every one associated with this organ & may this organization grows by leaps & bounds, seeing the suavity at large.

I think that Doctor’s are God. Because they give us light. If God forget to give us complete and clear vision and I think that Intralase LASIK is a very much good option for the people who have weak eyesight. I thought that why I delayed this and wasted my life suffering because of sight. I thank great doctor Ajay Khanna that I will live with my full eyesight and enjoy my life with this Doctor’s Gift.

Today my sweet daughter Ishu Kathuria was admitted for LASIK Laser. It is commonly heard that doctors are next to God. After seeing the hospital decorum services of all staff, particularly of Dr. Ajay Khanna are highly appreciable. As per my view, Doctor’s are more than God. I pray to God for all the success of the doctors in future also. Thanks a lot.

I really like the way that how they treat the patients. The way he talks to patients and feel cozy with him. Thanks doctor.Wish you all the best in future. I hope your hospital will make a good position or place in this country.

Found this institution one of the best in eye care.

Your is a truly a remarkable institution. The care is top class; the staff friendly and professional. I am really impressed and wish that in years to come this institution will get world recognition.